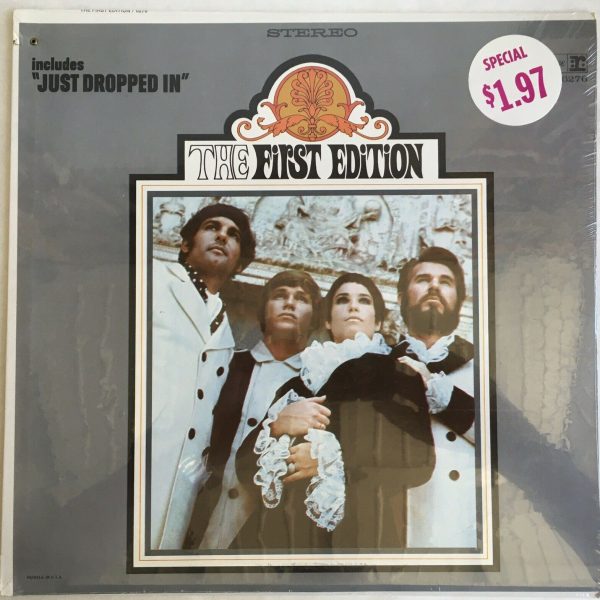 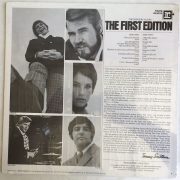 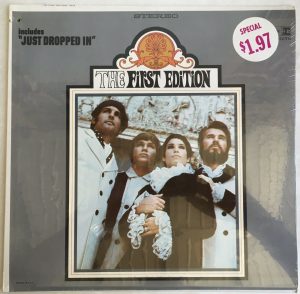 The First Edition LP Reprise RS-6276, Sealed. Outer sleeve is factory-sealed but has been marked for the cutout bin with a brass rivet. Bumping to corners and edges.
The First Edition (yet without Kenny Rogers’s name up front) was formed by several The New Christy Minstrels members who were tired of the group’s limitations to Folk music. Next to Kenny, Mike Settle was a most important member who wrote a lot of their material like most of the songs here. This debut album includes their breakthrough hit, Mickey Newbury’s anti-drug anthem “Just Dropped In” which the younger generation will know through it’s inclusion in ‘The Big Lebowski’.Despite the reputation this outfit earned from their later pop releases, their first two contained some noticeable psych influences, and are worth investigating. they still contain sizable helpings of their traditional orchestrated vocal harmony pop fare, but some tracks, in particular the hit “Just Dropped In…” contain rewarding psych flavor.
Track listing
A1
I Found a Reason2:47
A2
Just Dropped In (To See What Condition My Condition Was In)3:20
A3
Shadow in the Corner of Your Mind2:52
A4
If Wishes Were Horses2:32
A5
Ticket to Nowhere2:24
A6
I Get a Funny Feeling3:49
B1
I Was the Loser3:05
B2
Dream On2:45
B3
Home Made Lies2:20
B4
Marcia: 2 A.M.2:20
B5
Hurry Up Love2:35
B6
Church Without a Name3:15