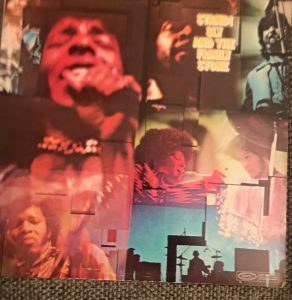 SLY AND THE FAMILY STONE “STAND!” (U.S.YELLOW EPIC) 1968 VG++/VG++ INSIDE GLUE COMING OFF JUST A BIT, DISC HAS A COUPLE LITE MARKS

Stand! is Sly and the Family Stone’s breakthrough moment. While they had a few hits earlier, this is the album that not only got them their first number 1 hit, but it’s also the moment their work became eternal. Iconic songs from front to back, but also a then innovative sound to their music that would go on to help birth the emerging funk genre. While it’s not their best album, it’s start of something truly great for Sly and the Family Stone, in addition to being one of the best protest albums of the year.

“Stand!” is the opener, and it’s a great start. It’s energetic, rich, and shows off many of the album’s themes of protest and equality. “Don’t Call Me Nigger, Whitey” has a good message, but this song is 6 minutes long and far too repetitive to warrant its run time. “I Wan to Take You Higher” is a great moment in the album that goes by way too quickly in my opinion. “Somebody’s Watching You” has some goofy lyrics, but overall it’s funky and fum. “Sing a Simple Song” is another one that just doesn’t do much for me. It’s alright but something just doesn’t click with me about it.

“Everyday People” is my favorite song on the album. Again, it continues with themes of equality, not to mention the popularization of the saying “different strokes for different folks”. “Sex Machine” is a 14 minute jam session with the band, and it is great from start to finish; the drums at the end are great, too. “You Can Make It If You Try” is a good closer. It’s a great song with a fine message about trying your best. Nothing mind-blowing but classic Sly.

Stand! is great. It’s a collection of great songs that are as smooth as butter with musical moments of richness. It also has some of my favorite songs of the era. I’d definitely recommend this one.