THE DOORS “WEIRD SCENES INSIDE THE GOLDMINE” 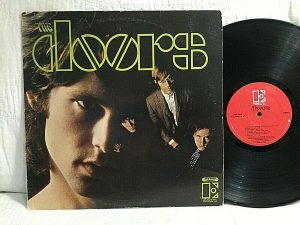 THE DOORS “SAME” (U.S.RED ELEKTRA)74007 stereo from 1969 THE GREAT ONE! Condition of cover is VG++ with edge and surface wear.Condition of vinyl is VG++, with some light scratches that DO NOT affect play.If ever there was a band that was representative of the Dionysian excesses of the psychedelic 60s, Jim Morrison and The Doors lived the part to the hilt. Even the band name “The Doors” was taken from Aldous Huxley’s The Doors of Perception (in which Huxley describes his mescaline experiences). When Morrison sang “Break on Through (To the Other Side)”, there was no doubt that boundaries were being broken, and with the surreal and serpentine phrasing of the Oedipal epic “The End” (“Mother, I want to FUCK YOU!”), those lines were shattered altogether. You won’t find many albums that include a Bertolt Brecht/Kurt Weill tune “Alabama Song (Whisky Bar)” alongside a Willie Dixon blues number “Back Door Man”, but somehow it all works, pulled together by Morrison’s overtly sexual baritone growl.The Doors album was the height of 1960s escapism. Nearly every song deals, in one way or another, with a trip (“The Crystal Ship”), a journey (“End of the Night”), or drug experimentation and the breaking of sexual taboos (“The End”, “Break on Through”, “Take it as it Comes”, “Back Door Man”). In context, even the song “Light My Fire” takes experimentation to another level, where even death itself is a possible outcome (“The time to hesitate is through/No time to wallow in the mire/Try now we can only lose/And our love become a funeral pyre”). Indicative of Morrison’s literate manner (he was a frustrated poet all his life), Morrison took up where Dylan left off and creates lush imagery and dark passages perfect for the drug-addled college campuses of the time, where Ginsberg and Kerouac were the patron saints ( “The cars crawl past all stuffed with eyes/Street lights share their hollow glow/Your brain seems bruised with numb surprise/Still one place to go…”). Morrison, shirtless and brooding, was an icon of the decadent 60s.