The Tormentors “Hangin Round” rare garage

THE STRANGELOVES “I Want Candy” MONO

The Third Estate “The Agonistes” cd 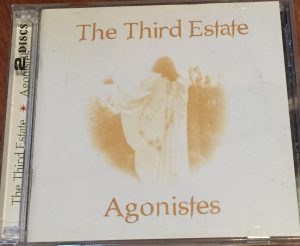 This CD is actually a dual release by the Third Estate and an earlier incarnation named Agonistes. The dual disc package devotes one disc to each band. Of course, The Third Estate’s “Years Before the Wine” is a true classic among folk/psych albums, and it’s reissue is worth picking up anywhere you can find it (not recommended: holding out for an original. I don’t recall ever seeing one for sale in 33 years!). Though not released until 1976, it was recorded two years earlier and is a relatively undiscovered “gem” from LA. And though folk seems to be the overall genre this record would fit in, there is some slightly harder material on hand as well. All tracks are delicately crafted and excellently recorded, featuring just the right amount of psychedelic influences to perfectly compliment each song without bashing the listener over the head with effects. Disc two includes all earlier material, primarily the unreleased album they recorded as Agonistes. This is also excellent, though slightly off the pace of “Years…”, due perhaps to a somewhat cruder sound. Recorded in 1973, it is mostly Christian folk/psych, with gentle mat’l, featuring acoustic guitar, and treated electric guitar effects. As bonus cuts, the disc includes 4 earlier tracks, 2 recorded in 1968. A fat-ass booklet completes the package, containing complete lyrics and band history, as well as lots of pics. Overall, a very impressive release, and highly recommended!
Formed
Baton Rouge, LA, United States
Members
Robert Everett (vocals, guitar, bass), Chas Harrell (guitar), Jerry Lang (drums)
Also Known As
Agonistes
Track listing
⦁ The Third Estate
⦁ 1.1 Years Before the Wine 10:17
⦁ 1.2 Useless Things 3:33
⦁ 1.3 Look at Me 8:41
⦁ 1.4 Kings 2:31
⦁ 1.5 Puppet City 8:07
⦁ 1.6 Think It’s Time 4:40
⦁ 1.7 The Third Estate 5:31
⦁ Agonistes
⦁ 2.1 Agonistes’ Funeral 4:35
⦁ 2.2 Sing His Song 3:28
⦁ 2.3 Think About That 3:55
⦁ 2.4 Sorrow’s Death 2:35
⦁ 2.5 The Sun and the Season 4:10
⦁ 2.6 Searching 2:57
⦁ 2.7 I Thought I Heard You Calling 3:47
⦁ 2.8 Resurrection 3:58
⦁