THE WIZARDS FROM KANSAS 80s exact repress of RARE 1970 U.S. Mercury stereo white label promo LP. Hailing from Kansas but with the San Francisco psych sound! Mercury Stereo SR 61309 VG+/M-.
Although this obscure group hailed from Lawrence, Kansas, their only album was a prime example of the late 60sWest Coast Psychedelic sound. They were definitely channeling the Quicksilver Messenger Service with their take on Buffy Ste. Marie’s “Codine” & the Jefferson Airplane with the excellent “High Flying Bird”. But they also wrote good original material such as “Misty Mountainside” & “She Rides With Witches”. This material had more of a country rock feel not unlike the Grateful Dead records of the late 60s & early 70s era. All 9 tracks are quite good & evoke the spirit of the times. This album sank without trace at the time of release but has been gaining stature in the intervening years resulting in several reissues such as this exact reissue from the late 1980s.
9 tracks- High Flying Bird, Hey Mister, Mass, Codine, Freedom Speech, Flyaway Days, Misty Mountainside, Country Dawn & She Rides With Witches.
Cover is intact & retains its original look & feel with no writing or split seams. There is a minor crease along the lower left side, scant ring wear on the front & minor corner wear. Overall the cover rates a VERY GOOD+ grading. Very few plays on this record. It looks & sounds great with no scratches or scuffs- rated near MINT. The Mercury white label stereo labels are intact & indicate that it is an exact reissue of the rare 1970 LP. 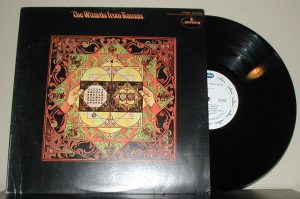