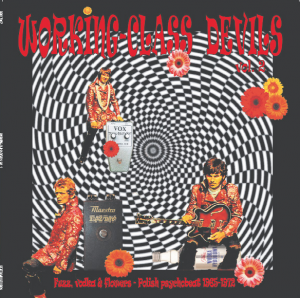 Just when you think you know all about the late 60’s/early70’s scenes on the planet, along comes the second volume of the mind-broadening Working-Class Devils series to deliver unbelievable cuts and bands. The faves from volume 1 are all there including Krzysztof Klenczon & Trzy Korony’s another prime freakbeat/psych fuzz rocker, Zdrój Jana’s trademark proto no-wave skronky-guitar weirdness or Niebiesko-Czarni horsing around again with a distortion pedal. The newcomers Wiślanie and Lancety take no prisoners with their crude US-style garage punk while Piotr Pastor & Słońce and Wiślanie 69 reveal more folk/hippie leanings thrown in for good measure; there’s even a Nederbeat gem that… turns out to be Polish and many, many more. These sides no doubt make for the ultimate in what could be tolerated in an Eastern Bloc country during the Cold War. Most of the tracks are excruciatingly obscure recorded during the cold war and then were shelved before excavated here in their juvenile glory. Non of these is re-issued on vinyl to date, which would spare you years of crate-digging. Couple all that with great band pictures and well-researched and exciting English-written liner notes and you have one hell of a disc including songs that could stand proud alongside anything released in the Free World at the time.